The genealogy and times of these families is outlined in detail on a related site:
https://www.rylancesargisonhistory.club/demo-energy-panels-front/family-histories/
Both families were weavers. Additionally the Rylances were varnish makers.
A useful resource for information about the cotton industry of the times is”the Testile Mills of Lancashire: the legacy” by Andy Phelps, Ruchard Gregary, Ian Miller and Chris Wild,
ISBN 978-1 -907686-24-5 , 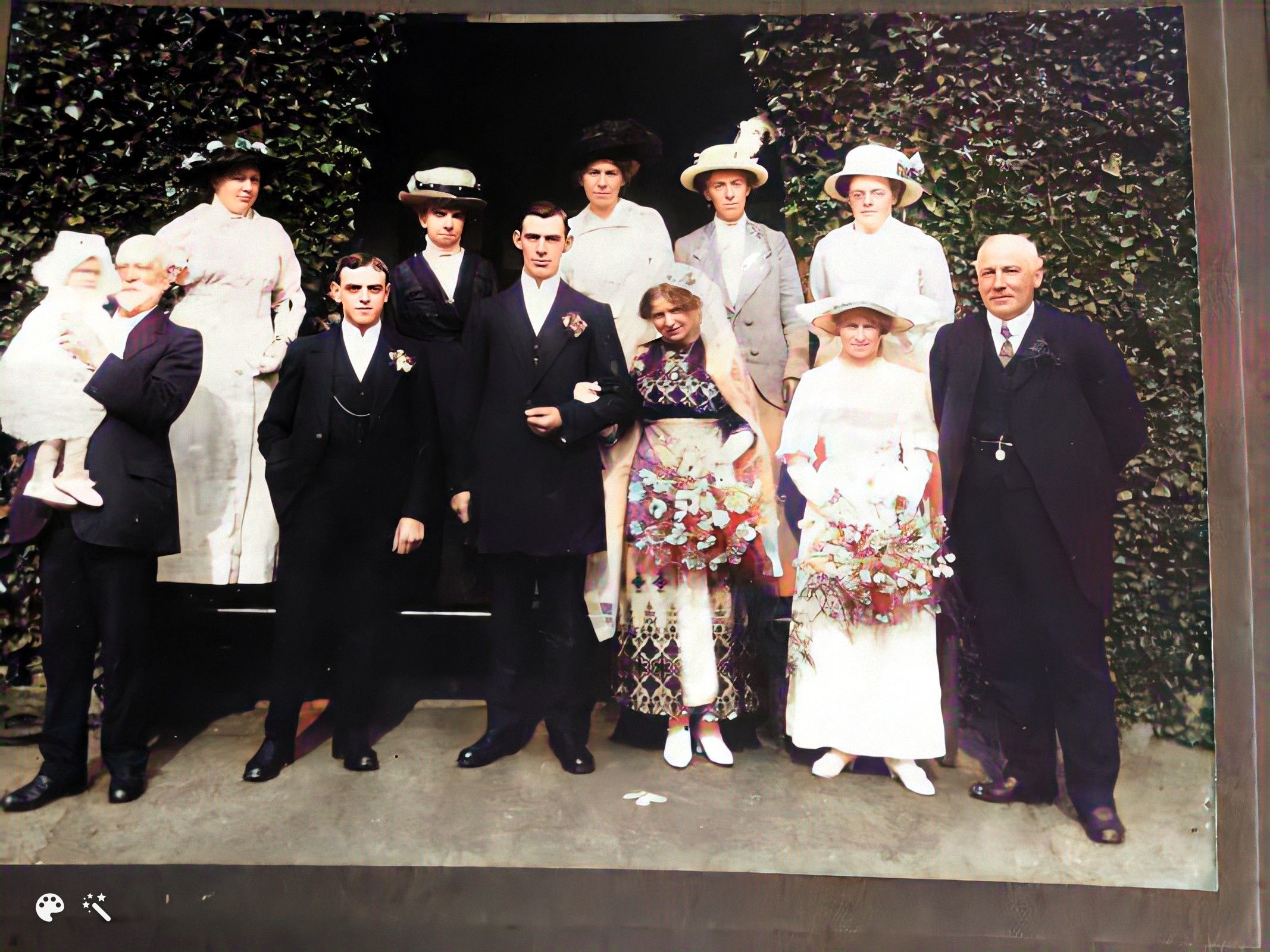 The Rylances were the last of our primary families to arrive in New Zealand in the early 20th century. Coming from Lancashire, they settled in Dunedin and Christchurch, Frederick was a paint manufacturer along with his two sons John and Thurstan. Frederick, daughter Muriel and sons John and Thurstan arrived in Dunedin about 1911. Father and sons established a paint/varnish company mirroring their former English operation.
Thurstan married Mary Clapham Moss in 1915 shortly after she arrived in New Zealand after the death of her father. She was a weaver by trade.

The family including the Moss side has been written up and features on our other website accessed through the button.

The wedding photo shows Mary in mourning for her father, Thurstans’s father Frederick holding Kathleen M Rylance then aged about 18 months. She was the daughter of Muriel C Rylance(1884-1973).

Moss is a name of ancient Anglo-Saxon origin from the Old English word mos, which denoted a peat bog. The name may have been taken on as a hereditary surname by someone who lived near a peat bog. There are, however,a lso place names that have come from this word, and the surname may have come from a pre-existing name for a town, village, or parish. Other instances of this surname may also have evolved from the personal name, Moses; and there was also an Ashkenazic Jewish name of uncertain origins that has evolved into Moss. Alternatively, the
name could have an ancient Norman surname derived from “Godefridus de la Mosce, Normandy, [who] held a fief from Philip Augustus of the honour or Malherbe.”

An alternative view is that it comes from English and Welsh: from the personal name Moss, a Middle English vernacular form of the Biblical name, Moses. Or from the English and Scottish: topographic name for someone who lived by a peat bog, Middle English, Old English mos, or a habitational name from a place named with this word. (It was not until
later that the vocabulary word came to denote the class of plants

characteristic of a peat-bog habitat, under the influence of the related Old Norse word mosi.)

It seems to have originated in Lancashire. The surname, Moss, was first found in Lancashire at Chat Moss, a large area of peat bog near the City of Salford, in Greater Manchester. Alternatively, the name could have derived from Moss, a village and civil parish in the Metropolitan Borough of Doncaster in South Yorkshire. One of the earliest records of the name was Ailmerus filius Mosse or Almer Mosse who was listed in Norfolk, 1153- 1168.

During their early development, the Moss family was found in Lancashire. They later branched to Raby Hall in that county where they intermarried with the Edwards family. Early records of this surname include David Del Mos in 1286 in the Assize Rolls of Cheshire; Stephen atte Mos in 1327 in the Subsidy Rolls of Staffordshire; and Robert del Mosse, listed in 1327 in
the Subsidy Rolls of Derbyshire. Some branched north into Scotland and acquired the lands of Loch Urde from the Earls of Douglas. Another family. held a farm in the parish of Holm

The name, “Rylance”, was first found in Lincolnshire where the family held a seat from very early times. They were granted lands by Duke William of Normandy, their liege Lord, for their distinguished assistance at the Battle of Hastings in 1066 A.D.
57 The Rylance family lived in Lincolnshire.
The ancestors of the family name, Rylance, are believed to be descended originally from the Normans, frequently but mistakenly assumed to be of French origin. They were more accurately of Viking origin. The Vikings landed in the Orkneys and Northern Scotland about the year 870 A.D., under their King, Stirgud the Stout. Thorfinn Rollo, his descendant, led his people into northern France early in the 10th century. In 911, King Charles
III was forced to cede territory to Rollo, who became the first Duke of Normandy, the territory of the north men. Rollo married Charles’ daughter and became a convert to Christianity. Duke William who invaded and defeated England in 1066, was descended from the first Duke Rollo of Normandy.
This name is also a topographical reference to land owned by the Rye family in this county. Rye is also topographical and indicates that the original bearer of the name lived near to a field of rye. One authority describes the name as being
English: topographic name for someone who lived near a
piece of land where rye was grown, from Old English ryge
‘rye’ + land ‘land’. adm Norwegian: habitational name
from any of three farmsteads in Vestlandet so named from
an unexplained first element + land ‘land’, ‘farm’. OV. Rare
as a Swedish name – 6 in Goteborg, probably imported
from Norway Probably an altered spelling of Dutch
Reiland.58
Mr. J. Paul Rylands, F.S.A., says the name ‘Ryelands is derived from the Anglo-Saxon rye or rhee, a water-course or stream, and lands, the lands adjoining or above the stream.’
There are many alternate spellings, typically linked to a common root, usually one of the Norman nobles at the Battle of Hastings. Although Rylance appeared in many references, from time to time the surname included Ryland, Roylance, Rylander, Rilands, Rylands and Rawlence.
These changes in spelling occurred often, even between father and son. Scribes recorded and spelled the name as it sounded. Typically, a person would be born with one spelling, married with another, and buried with yet another.