The Bradleys of Cork

Get a Tour
Contents
[hide]

Bradley is an English surname derived from a place name meaning “broad wood” or “broad meadow” in Old English.[1]

It is also an Anglicisation of the Irish name Ó Brolacháin (also O’Brallaghan) from County Tyrone in Ireland. The family moved and spread to counties Londonderry, Donegal and Cork, and England as the adjacent extract from Irish Names, page 445, 1901, confirms.
This particular family lines traces from Cork with the first recorded name being two John Bradleys, father and son. The second was born in 1770.

The first Bradley thus far identified was John Bradley, a Cork resident as was his son John born in 1770. The family seems to live around the Boherbue area in the NW of the county not far from Kilmeen. The following descriptions of the area are drawn from Samuel Lewis’ Topographical Dictionary of Ireland (1837)

KILMEEN, a parish, partly in the East Fractions of the barony of MAGONIHY, county of KERRY, but chiefly in the barony of DUHALLOW, county of CORK, and province of MUNSTER, 3 miles (w. S. W.) from Newmarket, on the river Blackwater, and on the new road from Roskeen-bridge to Castleisland ; containing 8322 inhabitants. It comprises 32,105 statute acres, as applotted under the tithe act, about one-fourth of which is arable land ; of the remainder, which consists chiefly of mountain pasture and bog, a large portion is now likely to be brought into cultivation, and the state of agriculture improved, by means of the facilities afforded by the Government roads recently constructed through this previously wild and almost impassable district. A court for the manor of Castle McAuliffe is occasionally held, in which debts not exceeding 40s. late currency are recoverable. The principal seat is Woodview, the residence of J. M’Cartie, Esq., situated in a well-planted demesne. A portion of the Crown estate of Pobble O’Keefe, now in progress of improvement, is within the limits of the parish. It is in the diocese of Ardfert and Aghadoe ; the rectory is impropriate in the Earl of Donoughmore, and the vicarage forms part of the union of Droumtariffe, in the gift of the Bishop. The tithes, amounting to £740, are payable in equal portions to the impropriator and the vicar. In the R. C. divisions it is part of the union or district of Boherbee, which also includes small portions of the parishes of Droumtariffe and Nohoval-Daly.

The chapel at Boherbee is a spacious modern building: there is also a chapel at Cushkeem or Cuscian. About 130 children are educated in three private schools. Of the ancient castle of McAuliffe, once the chief seat of the sept of that name, the foundations alone can now be traced.-

” Boherbue is a village in the parish of Kilmeen, barony of Duhallow, county of Cork and province of Munster, 5 miles (W) from Kanturk; the population is returned with the parish. This place is situated on the new line of road recently constructed by Government, and leading from Roskeen-bridge through King Williamstown to Castleisland. The village from its advantageous situation on the road above mentioned and also near the junction of the roads from Kanturk to Newmarket to Millstreet, promises to become a place of some importance. A police barrack has been latterly erected by Mr. W. Allen for the accommodation of the constabulary force stationed here; and R.C. parochial chapel, a large slated building recently erected, is situated in the village.”

It should be noted that the text was written before The Great Famine (Irish: an Gorta Mór[anˠ ˈɡɔɾˠt̪ˠə ˈmˠoːɾˠ]), also known as the Great Hunger or the Great Starvation and sometimes referred to as the Irish Potato Famine mostly outside Ireland.   which was a period of mass starvation and disease in Ireland from 1845 to 1849.[3] With the most severely affected areas in the west and south of Ireland, where the Irish language was dominant, the period was contemporaneously known in Irish as An Drochshaol,[4] loosely translated as the “hard times” (or literally, “The Bad Life”). The worst year of the period was 1847, known as “Black ’47”.[5][6] During the famine, about one million people died and a million more emigrated,[7] causing Ireland’s population to fall by between 20% and 25%.[8]

Kråkstad is a village and former municipality located in Ski municipality of Akershus, Norway. Akershus became a fief in the 16th century, and then also included the current counties of Hedmark, Oppland, Buskerud and Oslo, as well as the municipalities of Askim, Eidsberg and Trøgstad in the county of Østfold. In 1662 Akershus became an Amt (County), and in 1685 Buskerud was separated from Akershus and became an Amt (County) of its own. In 1768 Hedmark and Oppland were also separated from Akershus to become Oplandenes Amt (County) (and Askim, Eidsberg and Trøgstad were transferred to Østfold). In 1842 the city of Christiania (Oslo) was made a separate Amt (County) as well. 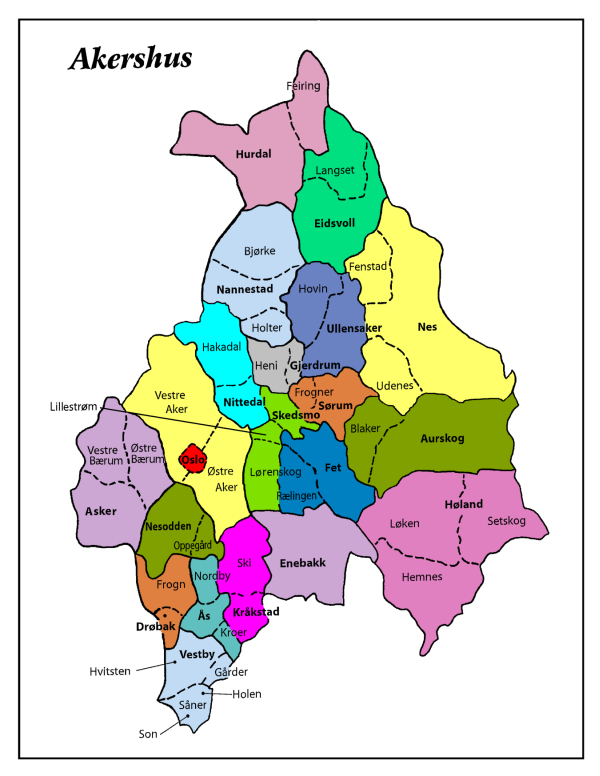