The Fraser line has been traced back to Donald Fraser in Invernessshire with his son Alexander marrying Margaret Unthank. Margaret was bon in Sandsend.Lyte. Her line traces back to James Unthank who lived in Kirkleatham, Cleveland, Yorkshire. He would have been the 1th GGF of Kathleen Fraser.

The Kirkleathem parish in 1831 contained the townships of Kirkleatham and Wilton; with East Coatham it has an extent of 6,748 acres, of which 34 acres are covered by inland water, 1,699 are foreshore, 1,966 arable land, 1,617 pasture and 159 woods and plantations. (fn. 1) By the sea the soil is mainly sandy, but further south it is clay upon lias. Wheat, barley, beans and turnips are the chief crops grown.

The Unthank family was from Yorkshire in England. Our emigrant ancestor, Joseph Unthank, recorded his family history himself in a small memorandum book now in the Friends Historical Collection at Guilford College. The information he presented has been substantiated and supplemented using Quaker meeting records from Yorkshire.

Both George and Mary Unthank were active Quakers.  George Baker, the historian of Friends in Yorkshire, records that “early in the eighteenth century, George Unthank gave a plot of land in the main street of Castleton, opposite to his own dwelling, on which a Meeting-house was built about 1730.”  Baker describes George’s home as being called “Goyter Hall.”  Mary (Shipton) Unthank was the clerk of her meeting. Her husband, however, was not a man of much learning, although he was a weaver’s apprentice as a youth, and was a weaver and farmer all his life. Joseph states that he “had no learning but what he got without a scool but could write down his afairs and but poorly could read…” Joseph tells, however, of his father’s being “the most spiritual minded man I think I ever was aquainted with, “ of his mother’s reading to her husband from the Bible, and of his father’s concern for spiritual matters.

George and Mary’s marriage seems to have been an unusually happy one. Joseph states “…my mother was extronerry good wife I think my father loved her more then his own life…” Mary was efficient and enjoyed a good reputation among merchants in York because she was punctual in payment of her bills.

Yorkshire Quaker records show that George and Mary both lived to old age.  Mary died the “30th day of ye 2nd Month” (April under the old calendar) and was buried in the graveyard at Castleton Meetinghouse.  George survived her over twelve years, dying 12th Mo. 22, 1759.  He was also buried at Castleton which he had donated the ground for a cemetery.

The following photo is the view from where his house was.

Simeon and MAry lived at 20 Pond St, Chelsea in one of these cottages.

Kuching20 Not sure that these are the same cottages but would have been built around the right time and definitely right place. Pond place where the Fraser family lived in a cottage named ‘Fraser cottage’, Pond Place, Chelsea. The house would have been in the ‘country’ when Simeon Fraser inherited the leasehold property from General the Hon Edmund Phipps MP after the Generals death in 1837. The cottage was numbered several times as 20 etc. and finishing as 11 Pond place. I think the variations in numbers were as new houses got built but the cottage was one and the same for the Fraser family. My 2x great Granny, Harriet Fraser died there in abt. 1854 so it had remained with the family for 45 years or more.Description for this block. Use this space for describing your block. 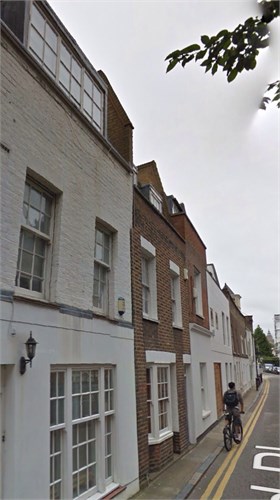